In an alternate reality, The Lovebirds would have opened in theaters nationwide the first week of April. However, we don’t live in that world and after the pandemic delayed every upcoming film in its path, Paramount Pictures decided to sell its new comedy off to Netflix, instead of holding off on the release. Ultimately, Netflix seems to be the right place for this film, as The Lovebirds represents a minor, but semi successful comedy that goes down easy with its brisk 87 minute runtime. 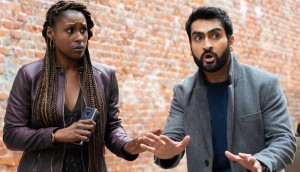 Kumail Nanjiani and Issa Rae star as Jibran and Leilani, a New Orleans couple who are seemingly at the end of their line together. On what might be their last date together, the couple accidentally witness a murder. Fearing they’ll be set up for the crime, the two flee the police and attempt to solve the mystery of the murder in the hopes of clearing their names. As the night progresses, the couple find themselves involved in more than just a simple murder case.

Director Michael Showalter (The Big Sick) certainly knows comedic timing and pacing, but despite the brief runtime — 81 minute sans credits — there are a concerning amount of dead spots. The script is nowhere near as tightly constructed as recent comedic caper, 2018’s Game Night, a much better example of what this film is striving for. As is the case with many comedies over the past 10 years or so, The Lovebirds too often coasts on the improv skills of its main stars rather than well-scripted gags. To be fair, there are a number of big laughs here, much of which is anchored by Rae and Nanjiani, but the amount of scripted gags that land are far outnumbered by the disposable jokes found in the editing room.

Some bits work better than others; the entire murder sequence early on nails the darkly funny tone the film never really follows through with. A scenario in the final act involving an Eyes Wide Shut type of gathering mines quite a few laughs as well. However, there are a handful of scenes that linger far past their punchline that drag down the pacing.

Although studio comedies like this don’t always require the most original or unique plotting to work, The Lovebirds still feels painfully familiar. The dramatic backbone — if you can say there is one — focuses on the failing relationship between Jibran and Leilani, but even that material feels too thin for its own good. The premise actually sets up moments for genuine shock or a few twists, with the final act teetering with subverting expectations, but the film quickly heads back down the predictably safe route. 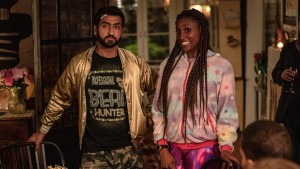 The Lovebirds finds itself operating in the “folding laundry” type of cinema Netflix excels in during the non-Oscar seasons. The chemistry of the two leads more than carry the weight of the film, making this a suitable fit for mindless quarantine viewing.

About the Author: Noah Damron

Born and raised in St. Ignace, MI, just across the Mackinac Bridge, A graduate of the Motion Picture Institute in Troy, Michigan, Noah has had a love for cinema since before he could remember. His favorite films include: The Dark Knight, Pulp Fiction, 2001: A Space Odyssey, 12 Angry Men, Halloween (1978), The Raid 2, To Kill A Mockingbird, Moonlight, The Shining, Toy Story.