Reflecting back on the past decade, we have had quite a few memorable films about clerics wrestling with their faith, such as Martin Scorsese’s 2016 masterpiece “Silence”, Paul Schrader’s “First Reformed”, and Xavier Beasvoise’s complex 2011 film “Of Gods and Men”. All three films explored existentialism within faith and the convictions and suffering that dogma creates from it. Brazilian filmmaker Fernando Meirelles’ latest film, “The Two Popes”, only hints at a fraction of such complexities; a prestige Oscar season movie that merely scratches at the surface of topics it only wishes it fully explored. The result feels whitewashed and unearned: a deeply watered down indictment of the Catholic Church and religious affliction that suffers from hero worship for Pope Francis and romanticization of his progressive beliefs.

Which is odd because the Brazilian filmmaker behind the 2003 masterpiece “City of God” prevented sugarcoating the harrowing lifestyles of poverty and crime in his debut feature, yet ever since, Meirelles seems to only craft Oscar-baity prestige pictures like the overrated bore “The Constant Gardener”. He then went on to direct two huge critical and commercial flops with “Blindless” and “360”. Meirelles hasn’t made a picture in almost 8 years, yet “The Two Popes” feels just like another unearned awards season picture that is designed only to pick up some Oscar nominations and soon after be forgotten.

“The Two Popes” starts out as something like a sophisticated and verbose variation of “My Dinner with Andre”: two people coming together for an extended conversation. Meirelles’ and screenwriter Anthony McCarten’s film adaptation of the latter’s own stage play about two popes from different backgrounds and viewpoints–one liberal, the other conservative–debating and eventually finding compromise and earning each other’s respect may sound engaging and timely on paper, and it indeed holds some merit with its sharp exchanges and two strong performances by its two leads, yet the film doesn’t amount to anything nearly as compelling or complex as it should. Sure, one can point out that it captures the current state of the polarized Catholic Church, but the film never truly resonates or succeeds with its explorations. The film declines in quality after it begins using a clunky and unwarranted flashback structure that only fuels its heavy-handed soap-boxing.

The film is about Argentinian Cardinal Jorge Bergoglio (Jonathan Pryce, who is indeed memorable here) deciding to retire from the Catholic Church. Haunted by his persecution he suffered by the military dictatorship led by Jorge Rafael Videla, he’s recruited by Pope Benedict XVI (Anthony Hopkins), who wants Bergoglio to travel back to Vatican City in hopes of persuading him away from retirement. Pope Benedict also has retirement on his mind as he anticipates Cardinal Jorge becoming his successor. While they hold vastly different views–quite a few topics like child sexual abuse scandals, climate change, contraception, and gay rights are earnestly debated and discussed–these men of faith and vastly different social views end up generating an improbable friendship together. This would put Jorge, who placed second in 2005, back in competition in the clergy election of selecting a new Pope, putting a damper on his retirement plans.

While the film indeed touches on some hot-button issues, this quickly gets passed over as the film tends to work more comfortably when it operates more as a light comedy with the two popes sharing screen time and exchanging banter together. Pope Benedict is portrayed as being literal minded–someone who doesn’t understand pop culture and jokes–while Cardinal Jorge Bergolglio, who eventually becomes Pope Francis, is viewed as being humble, down to earth, and in touch with the changing social norms. This sort of mismatched odd couple actually does shine and generates laughter along the way, thanks mainly to the onscreen chemistry between Pryce and Hopkins.

Once the film explores Jorge’s controversial past in Argentina as being a political exile who cooperated with the military dictatorship of Videl to spare the lives of his own clergy, it explores the extent to which Bergolglio was an enabler for Videl’s dictatorship through flashbacks. While certainly aesthetically unique from rest of the movie, these flashbacks feel unwarranted and calculated.

As the flashbacks unfold you just want to get back to Vatican City with the two leads because of just how jarring and uninvolving the flashbacks really are. The film does explore the flaws Pope Francis, so it doesn’t paint him as too much of a saint, yet it becomes jarring once again as it goes for too many cutesy moments involving Jorges teaching Pope Benedict about the Beatles, sharing pizza together, and watching the 2014 World Cup final. It is then when one realizes that the material’s only aim is to be more of a crowd-pleasing Oscar bait movie than a film that is more complex or morally ambiguous.

The film carries on with the great chemistry between the two leads as noted above–the two hold many deep philosophical discussions. Yet there is seldom any mention of corruption and scandals. There are no direct exchanges dealing with how to handle the child-abuse scandals and cover-ups that still plague the Catholic Church today. These controversies merely end up becoming lightly sketched topics, as if Meirelles and McCarten were too timid in confronting these hot-bottom issues and ultimately playing it too safe. One particular moment has Meirelles drowning out the sound as Pope Benedict asks Bergolglio for forgiveness; this stylistically works in just how overbearing the truth is, yet it almost feels like a cop out on Meirelles’ part as the whole film becomes an exercise in concealing from us any uncomfortable level of candor. What could have felt complex and sophisticated instead comes off as tactless and ungainly. 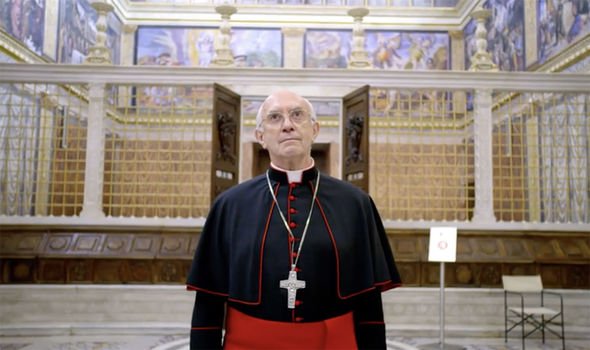