Firmly riding the line between annoyance and infectiousness is Producer-extraordinaire Ryan Murphy’s film adaptation of the Broadway musical, The Prom. Murphy, directing his first feature since his 2014 HBO film The Normal Heart, enlists a top-tier cast including the likes of Meryl Streep, Nicole Kidman, James Corden, Kerry Washington, and more to give the short-lived musical its cinematic treatment. While The Prom features no shortage of extravagant pizzazz, the manic energy and candy-coated visuals borders on cinematic overkill. 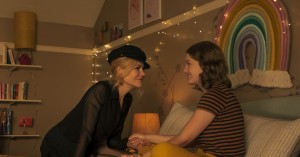 As arguably the selling point of the film, the actors do a rather effective job of taking this grandiose material and infusing it with something resembling humanity. Meryl Streep giving an electric performance is as expected as rain in a thunderstorm, even as she and Keegan-Michael Key (playing the likable high school principal) are stuck in an awkward romantic subplot. While you couldn’t consider this writer to be the world’s biggest James Corden fan, he gives perhaps his most compelling performance to date. You could easily pick at his flamboyant portrayal as a gay Broadway star to be bordering poor taste, but Corden does add some considerable depth to the role.

Nicole Kidman and Broadway vet/Murphy regular Andrew Rannells share some of the films most memorable sequences. However, the biggest scene-stealer comes from that of Jo Ellen Pellman. In her first screen appearance, Pellman provides the film with a much-needed emotional resonance to counterbalance the uneven melodrama. 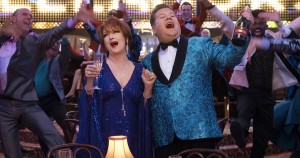 Ryan Murphy stuffs The Prom with numbing amounts of cheerful razzmatazz, but skimps out on any distinguishable directorial traits. Cinematographer Matthew Libatique does most of the heavy lifting, giving the film its bright, energetic style, but Murphy’s direction leaves much to be desired.

For a musical containing 19 (!!) tracks, only a handful leave a lasting impression, with a majority of the numbers far too overedited to truly dazzle. The numbers that do work are largely due to the songwriting and the actors performing them. The most unavoidably infectious number coming in the form of “Love Thy Neighbor”. Not only is it the catchiest and most humorous of all songs, but Andrew Rannells’ irresistible charm is on full display.

Despite hitting some of its expected notes quite well, the uneven pacing lessens much of the potential impact. With an exhausting runtime of 130 minutes, this could have easily been trimmed down 20 or so minutes — equivalent to 5 musical numbers. The stiff tonal shifts that often call to mind a Disney Channel movie do a disservice to the themes the film often raises.

The clichés are lazy and although the satire on fame and celebrity are initially amusing, that part of the script is quickly forgotten. The humor, which largely consists of tired fish-out-of-water shtick, is also far too sparse to fill the 2+ hour runtime. 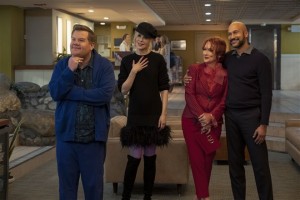 Amidst all the sugary-sweet glamour, there is a beating heart lodged directly at the films core. The open-hearted plea for acceptance and the inclusivity of its LGBTQ+ characters is often able to compensate for the didactic handling of such material.

The Prom will surely resonate with its intended audience and hopefully open the hearts of others, but its grueling runtime and constant flashiness will prove severely vexing for others not already in this films wheelhouse.

About the Author: Noah Damron

Born and raised in St. Ignace, MI just across the Mackinac Bridge, A graduate of the Motion Picture Institute in Troy, Michigan, Noah has had a love for cinema since before he could remember. His favorite films include The Dark Knight, 2001: A Space Odyssey, The Last Temptation of Christ, Halloween, 12 Angry Men, The Shining, Moonlight, Pulp Fiction, Do the Right Thing, The Devil's Rejects, Toy Story. American Psycho, To Kill A Mockingbird, Bram Stoker's Dracula