Over twenty years ago, infamous Japanese director Hideo Nakata launched his career with the J-horror hits Ringu (1998) and it’s follow up Ringu 2 (1999). In collaboration with novelist Kôji Suzuki, the two were able to conjure up a definitive horror icon which has continued to be remade in America time and time again (once even by Nakata himself). Four years after their initial success the two would reunite for Dark Water (2002); A minimalist thriller which follows a recently divorced mother and her child as they are plagued by a dark and eerie water leak coming from their apartment’s ceiling.

At the center of the picture are the two deeply authentic performances by Hitomi Kuroki who plays the mother Yoshimi, and Rio Kanno who plays her six year old daughter Ikuko. If you stripped away the brooding atmosphere and palpable fear you’d still have an engaging mother/daughter story in which they attempt to assemble their lives after going through a tough divorce. Here is a film that deals with heavy themes such as isolation, abandonment, and more importantly; mental illness. The latter being fairly uncommon in the genre.

Seemingly impossible, Dark Water transcends every genre trope imaginable. Since the film approaches the environment, the amount of characters, and threat in a minimalist fashion there is an abundance of room to explore the character’s psyche. All of these factors come together to keep the intrigue and suspense alive. If it all starts to sound a bit like Jennifer Kent’s The Babadook, you’d be correct. Only this film features more complex performances and haunting world building, and was released over a decade earlier. I think it’s safe to say that if you enjoyed Kent’s film, you’ll be floored by what this has to offer. 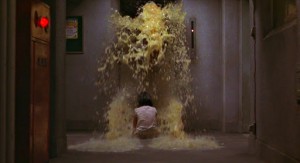 Hideo Nakata brought back Jun’ichirô Hayashi (who previously shot Ringu) to be the film’s director of photography. Hayashi’s 35mm Arriflex photography lends an observant eye to the film that actually adds to the suspense.  The empty corridors of the apartment complex and it’s horrifying elevator security camera will have your eyes glued to the screen. By the end of the picture, I knew exactly where each room was in their apartment and how many floors there were. It’s always impressive when a film can make you memorize a certain space in time like it’s yours.

Hideo Nakata’s Dark Water is one of the most overshadowed films I’ve reviewed so far for this series. Despite being successful enough at the time to spawn an atrocious 2005 American remake, it has yet to be recognized by most audiences as one of the true Japanese masterpieces of the 2000’s. If you’d like to decide for yourself it is currently streaming on Shudder (with Subscription), Amazon, iTunes, and Google Play (starting at $1.99), and is available for purchase on Blu-ray/DVD from Arrow Video.

About the Author: Jake O'Brien

Jake O'Brien is an independent film director and screenwriter who specializes in cult and classic cinema.