Once you watch the trailer and read the concept of Taika Waititi’s “JoJo Rabbit” your mind asks if this film will even work? Does it even have to work? Does it even have to exist? The answer to all of these questions is no. The film is just very discordant and unsophisticated in every way, sure it can claim itself as being an “anti-hate satire”, which is very much in the vein of Mel Brook’s “The Producers”, and even the 60’s TV-sitcom “Hogan’s Heroes”, that both used comedic satire on Nazi’s, Jews, the Holocaust, and other horrors of WWII, yet the laughs there were oddly earned, where this is not.

Set in a artificial and overly precious children’s book setting, “JoJo Rabbit” is nothing more and nothing less than a hipster, misguided variant of Wes Anderson films, in which mockery of Nazi’s and other forms of fascist oppression is partially obscured by manipulating sentimentality with complete idiocy. We get horrific bad jokes that fail to generate laughter, along with political self-righteous posturing and other forms of foolishness. 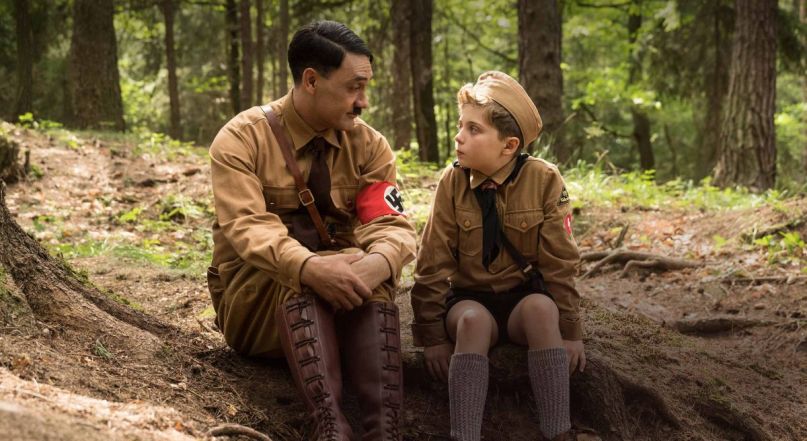 We begin in the mid 40’s Germany, where 10-year-old JoJo (Roman Griffin Davis) who’s childhood innocence has been stripped away from him through fanatical indoctrination. He loves dressing up like a Nazi and he even has an imaginary friend, Adolf Hitler (Waititi). Yet the violence and hatred he witnesses doesn’t set right with him.

Once Jojo finds out that his more accepting and empathetic mother, Rosie (Scarlett Johnason), has been secretly hiding a young Jewish teenager named Elsa (Thomasin McKenzie from “Leave No Trace”), empathy and co-existence start to become a newfound concept for young JoJo. Waititi has always been heartfelt in his films, dating back to his debut feature of “Eagle vs. Shark”, which was a  “Napoleon Dynamite” riff. With his latest feature Waititi goes for comedy and satire here, but it fails to work. All that is left is cloying sentimentality and overly earnest moments that are far from subtle as it aims to pull at your heartstrings.

“JoJo Rabbit” blends the history and idiocy that would be found in Tarantino’s vastly superior “Inglorious Basterds”, yet Nazi’s aren’t supposed to be funny, and sure they held a deadpan menace in Tarantino’s version , and the Nazi’s definitely weren’t funny in Mel Brook’s “The Producers”. Waititi’s film comes off like a political gimmick, and every bit as juvenile and ineffective as political memes you would see on social media. Eventually Jojo predictability earns his arc and outgrows his childhood identification of the National Socialist Party.

It’s not to say there isn’t bleakness to be found, in a earlier scene where Rosie takes Jojo to look at dead Jews hanging from the hallows, JoJo responds “Ick”, and the scene fails to work as its executed with very poor taste.

The way Waititi treats his audience is very patronizing as well, he manipulates every viewer with every tonal shift that occurs. Waititi wants to be funny and moralizing in the same picture. What he really should have pulled off is just how Chaplin, Keaton, and Woody Allen would have with something like this, they would have made it funny and equally philosophical at the same time. Waititi material never comes off darkly funny or clever. While Waititi is more concerned in being self-aware with its fable than being historical realistic, the film is presumably showing how society and innocence is lost in its indoctrination. How appealing you find it will be how accepting you are to its hallow gesture and annoying preciousness. 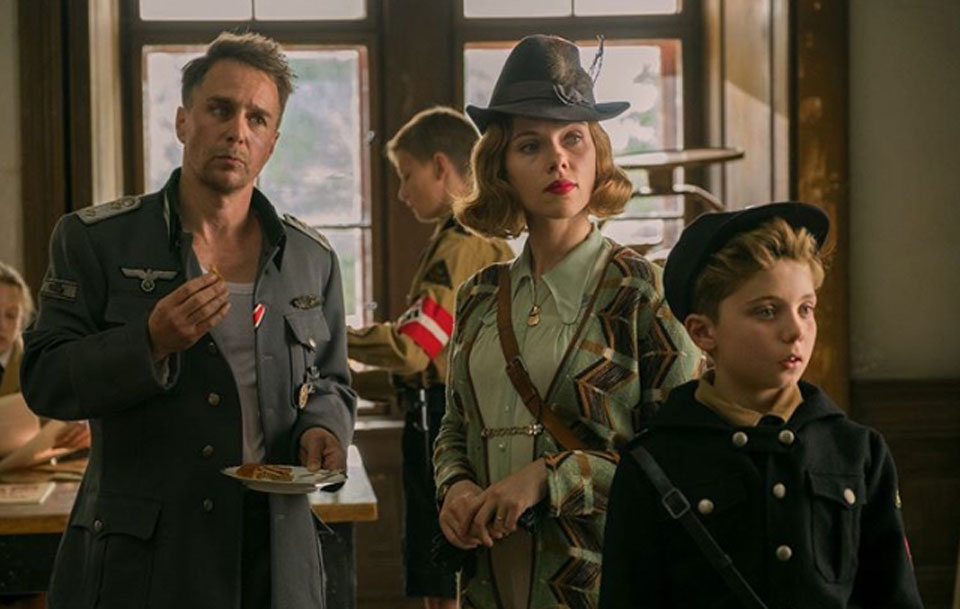 While the satire here does capture the absurdity of fascism, ultimately Waititi’s sentimental fantasy surely undermines the suffering of Holocaust victims, with the self-consciously of Waititi’s endless visual gags that are just an array ofa several creative missteps that include an offensive use of David Bowie’s “Heros”, along with many other cardboard stereotypes and other anti-Semitic gags.  A stronger film like Gunther Grass’s “The Tin Drum”, and even “The Death of Stalin” captured the oppressive nature of indoctrination with more shewdness. Instead of receiving sophistication, all we get is just more self-congratulating Hollywood moralizing that just feels smug and elitist.