Short films just as feature films invoke emotions. Sadly there isn’t much of a market for short films since there are so many of them, and people prefer to not spend their hard earned money on something that can be less than 30 minutes in running time. Distribution is also very challenging with shorts, with only a few avenues the market is catered to feature length movies. Yet with endless amount of film festivals, YouTube, Vimeo and social media platforms, marketing and getting your work out there is far easier than it ever has been before. Yet the biggest challenge filmmakers face is trying to get people to watch their work. They submit their films into endless amount of festivals, spend hundreds or even thousands on expensive entry fees, and they might get lucky if they get into one just because of how competitive and saturated the medium is. It leaves a lot of filmmakers scratching their heads in what they did wrong?

Being an award-winning independent filmmaker that has played at numerous film festivals across the nation myself, I understand the challenges and pitfalls independent filmmakers have to endure in getting their films out to the world. You ultimately want to find a bigger audience outside your circle of family, friends and even community. All the big film critics on RottenTomatoes are extremely busy writing about the next big Hollywood movie, or the big sensation at Cannes, Sundance, Toronto Film Festival, and many other big film festivals. Some filmmakers are left with less than 500 views on their Vimeo or YouTube Links, and they quickly just move onto their next project as their film is left abandoned that is barely viewed. Making a film is a very challenging journey, it doesn’t matter if its a short or feature, documentary or animation, its a collaborative process that takes a lot of time, development, devotion and resources to make it right.

Too often people say “if its good” it will do well. I have watched plenty of great short films that only played at very small film festivals, so that word “Good” is very subjective. I have also watched some horrific short films that have played at some of the bigger film festivals like Sundance and SXSW, and to be honest I have watched short films at the smaller film festivals that I felt exceeded them in story, technique and execution. Filmmakers these days have to go through a tough screenening process that is stacked with subjectivity, nepotism, politics, and endless debates of screeners agreeing or disagreeing what to play. I was once a screener for a few film festivals, so I know the backstage politics and the vetting process that goes on. What are the chances of 3-5 screeners really loving your film across the board? In fact find me 5 random people in a row that all agree if P.T. Anderson’s “Phantom Thread” or Nicholas Refn’s “Neon Demon” are great, no matter what happens there will always be detractors dismissing films.

That being said I have decided each month that here on Defacto that we will do a showcase of quality short films from the state I currently reside in of Michigan. Hopefully this blog will allow more people to seek these short films out. Here at Defacto Film Reviews we truly believe in independent filmmaking, and we believe in short films, even though we often write about features and the more mainstream releases, we want to make this site open to our own community in hopes that more windows come open for smaller scale filmmakers to get their work shared and out there. We understand the importance short films have in cinema, storytelling, and even community and culture. We want to ultimately embrace and empower a next wave of artists. Each month we will review 5 Michigan short films that we found to be impressive on a technical, emotional, and storytelling level. We attached all of the information on the shorts down below.

Patrick Neff’s short is similar to the final vignette in Woody Allen’s classic sex comedy “Everything You Wanted to Know About Sex*But Were Afraid to Ask” as both are about these NASA mission controls inside of a man’s brain, while Patrick’s version here is far less edgier and perverse as Woody Allens, its every bit as hilarious and clever. The film has a strong cast and it earns solid laughs and sweet sincerity.

Myra and Kate are two souls that hold unspoken longing towards one another as they are both going through transitions in what they want out of life and even love at their young age. A short that is about a friendship and love, ” Dead Tooth” is one of those cases in a short film that shows instead of tells. In many ways the film is a revolt on social norms and modern love, and a celebration of unleashing repressed desires and emotions. Laena Bradley’s poetic visual eye is very minimalist as it evokes a certain spiritual awakening out of the repression the characters have as they move towards a more liberating final moment.

Written and directed by Jeffery Schultz  that stars John Savage (The Deer Hunter, Shampoo) and Kate Connor about a married couple who hold a final encounter with each other in their loft. The short held a lot of emotional truths about the agony and lost elation’s of love. The short has already had some good success on the film festival circuit, and its very beautifully shot and well scripted. Very much in the vein of a Woody Allen picture, Schultz digs deep into the scenes of a marriage on its final stretch.   Schultz has exquisite eye for pleasing aesthetics and engaging characters.

“Fun Time” co-written and directed by Joe Eatman in his debut short film. It was a hilarious exploration of the mundane where his brother Grant Eatman plays a lethargic toy store retailer clerk who spends a majority of his time bored and disinterested with the enormous amount of demanding, rude,and quirky customers he holds exchanges with. Jonathan West, Chris Newman, Melissa O’Brien and Jimmy Doom all co-star in this short that is filled with a lot of sharp exchanges merged with great deadpan hilarity. 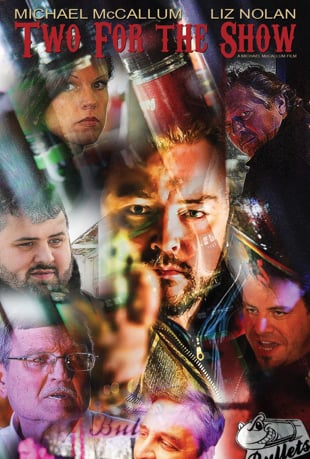 The thought of a 40 mins short film sounds insufferable, however Lansing based independent filmmaker and actor Michael McCallum pulls off a well-crafted, greatly paced, and highly engaging suspense drawer. By cleverly inter cutting clips of old 1950’s cartoons and tv shows to capture the characters state of mind, “Two for the Show” is a modern neo-noir drama that is part character study, part thriller that always feels raw and natural. Michael McCallum stars as Bryan, a loner and drifter who comes into a small town in Michigan to visit his ill Father (William C. McCallum) for the last time, during this time his 20-Year High School reunion is going on where he is lured in by a beautiful abused woman (Liv Nolan) as he attempts to getting her out of her abusive relationship she is in. I have been following McCallum on the local film circuit for 10 years now, and he shows greater confidence behind and in front of the camera, and you can see his maturity and growth of his craft in this film, and the writing is  comparable to the noir elements of great 1950’s films and even the Coen Bros. Seek the film out here  https://vimeo.com/ondemand/93662

To be considered for our monthly Michigan short film round-up,  we require that your film must have played on the film circuit, we can’t guarantee a review of all films. All links can be e-mailed and information can be e-mailed to us as at movienut97@gmail.com