Bong Joon-ho returns to his homeland of South Korea, in his new film “Parasite”. His audacious style and genre-driven sensibilities still reign supreme, yet this time his ideology and idealism is shaped into a subversive film that echoes the family dynamics that were found his 2007 monster flick “The Host”. This time the monster on display in this film isn’t a literal or physical creature that is formed out of pollution, but the monster in display in this film is South Korea’s current class division and wide gap between the wealthy and the impoverished.

The film opens up in a confined and minuscule apartment, a family of four are sent into hysteria once the WiFi connection that is being pirated is disconnected, and the networks password is changed. Ki-jung (Park So-dam) and her brother, Ki-Woo (Choi Woo-Shik) scuttle through their apartment as their father, Ki-taek (Song Kang-ho) directs them to try holding their phones in a corner of a ceiling in which they can find a new connection. Meanwhile, Moon-gwang (Lee Jung-eun) is deeply concerned about the families finances and standard of living, and its revealed they need internet access to gain information on getting work for boxing hundreds of empty pizza boxes for a pizza chain. Ki-woo ends up finding success after he bamboozles a wealthy family after he gets an opportunity to tutor Da-Hye (Jung Ziso), the daughter of the ultra wealthy Park family.

In many ways, “Parasite” echoes Hirokazu Kore-eda’s poignant and humane “Shoplifters” last year, even going so far in making Ki-teak and his family grifters that also pull off deception and cons to gain more income and higher standards of living. This leads Ki-Woo successfully convincing the Parks by bringing his family to be employed by them for some income. Ki-jung becomes an “art therapy” psychologist for the Park’s hyper and traumatic young son, Da-song (Jung Hyeon-jun), and, eventually the Park’s driver and housekeeper are phased out of their jobs through manufactured and expatiated framing that sabotages their jobs by the poor family, that ends up being replaced by Ki-taek and Moon-gwang.

Bong is able to pull off his left-wing social commentary with some complex ideas about class division, that takes a wild left turn with a huge reveal that continues to defy expectations throughout. The end result is a wildly audacious and highly engrossing film that is far being predictable. Bong challenges the audiences expectations, by using shocking revelations and many layers that bring out the characters internal conflicts, dynamics, and repressed psychologies, from both families–the poor family hold shame, class envy, and deception, while the wealthy family hold a lack of empathy, compassion, and of course hold a lot of judgment and snootiness.

The twists and surprise turns in the film also allow Bong to use some tonal shifts that may feel jarring. Without revealing too much, there is one twist that involves a secret bunker in Park’s luxurious and wealthy home that takes a left-turn feels like it belongs in a completely different movie. Yet, this also allows Bong to utilize his sharp directing skills along with a visual flair and suspense staging that echoes the work of David Fincher and Brian De Palma.

A great moment in the film is the arrival of a severe rain storm that basically unravels the class struggle and warfare between the families. The Parks must turn around from their planned camping trip, while the Ki-taek and his family slum neighborhood is being destroyed a flood of water. We get scenes and sequences of nail-biting suspense and impeccable craftsmanship that ranks in some of Bong’s finest sequences he has ever staged. 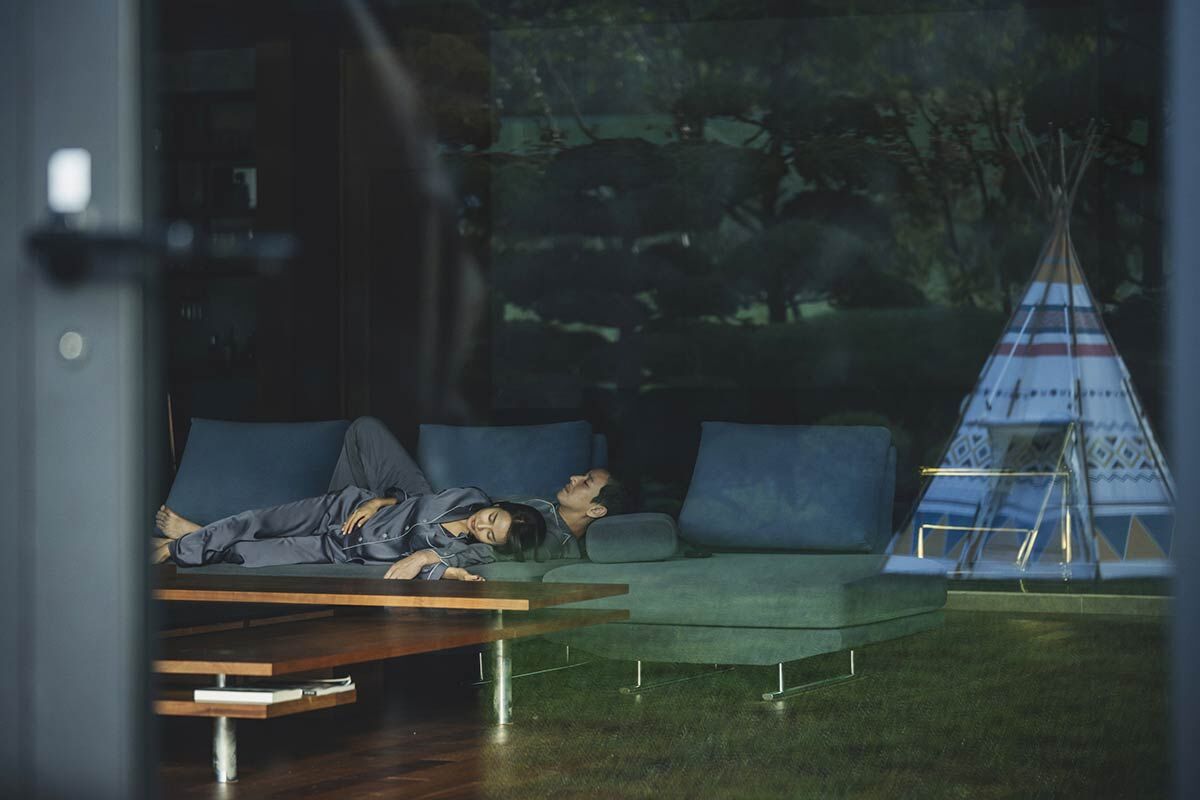 The visual language on display confirms Bong as a visual craftsman. Collaborating with cinematographer Kyung-pyo Hong (Burning, Snowpiercer), Bong and Hong utilize the frame with astonishing framing and immaculate detail. The empty and luxurious space of the Park is meticulous, and is shot like a Fincher film. The space suggests the endless yearning the Kims yearn for, which at the same time feels like prosperity is at an infinite space, while their apartment space feels confined and almost like they are imprisoned are just great symbolic imagery that makes this film work very well on a stylish and visual standpoint. Below the Parks home is the bunker, in which everyone is caught in a world of class separation.

What prevents “Parasite” from being a perfect film, or even as a masterpiece is the jarring and overstuffed climax in the third-act that involves some brutal violence, along with undeniably beautiful epilogue that echoes Spike Lee’s finale of “25th Hour”, that somewhat feels unearned and contrived. Perhaps it would have been more earned had Bong tacked on a few more scenes of some stronger character depth of the families that is certainly found in “Shoplifters”, thus he would have accomplished the dramatic weight that was needed for the finale to work. There is also some questionable moments of implausibility in the writing that is grounded in a hyper-real reality of Bong’s hyperactive style. Both Ki-jung and Ki-Woo are very talented young adults who hold many great talents, Ki-Woo can use Photoshop and graphic design software very well, and Ki-jung is very sophisticated and smart, why can’t they find greater prosperity? Other than the fact Bong is suggesting people are trapped and confined to poverty. All around, Bong’s latest effort is a scathing plea for greater compassion and humanization in South Korea’s socio-economics and society, and in many way this film plays off like a class trilogy, that involves “Shoplifters”, and even Lee Chang-dongs masterfully crafted “Burning” (My 2nd favorite film of 2018), that also hold some of the same ideas. All around this film showcases just how original and unique Bong’s vision really goes. He is without a doubt, one of the most fresh and unique working auteurs working today.